Bellshaw ready for the battle of Bute 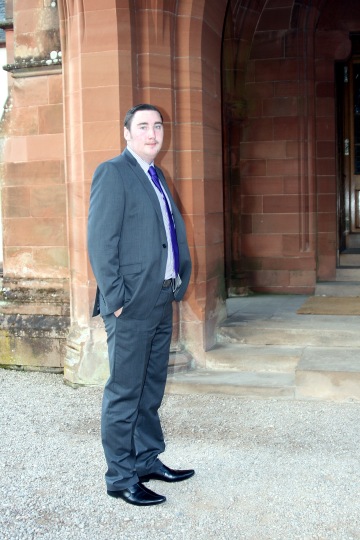 ADAM BELLSHAW will be 19 when the next round of Scottish local council elections take place, and he will be running for office on the Isle of Bute. The island’s three current councillors – Len Scoullar, Isobel Strong and Robert Macintyre – have had a strong following for years. None of them are under 50 and all of them make Bute’s older population – a strong feature across Argyll & Bute – feel represented.

They probably don’t give a great deal of hope to Bute’s younger generations. The island’s brightest and best young minds are usually fleeing to the city by the time they reach Adam’s age. The prevailing attitude is that Bute is the place to raise your children and, rather morbidly, to die.

For anybody in between, they face an increasing struggle to find work and opportunity. The island needs some new ideas, and Adam Bellshaw is screaming from the roof tops.

Adam was born and raised in Cambuslang until the age of seven when his parents, William and Lorna, relocated the family to Bute.

“The area we lived in was a bit too dangerous, my mum didn’t want us to grow up around that. She thought it would be a nice quiet life for us. It was a lot better than Cambuslang and everyone was a lot friendlier than Glasgow,” Adam said.

“That is why I took such an interest in what’s happening on the island. I love the quietness and the community spirit.”

A tall but well-built young man, it’s a struggle to believe Adam is just 18. His commanding presence is softened by his polite and well-mannered attitude and his passion for local politics is rarely associated with someone not long out of secondary school.

Having attended primary school and Rothesay Academy on Bute, Adam progressed to James Watt College of Further and Higher Education in Greenock in 2011 to study social sciences, a course which teaches his beloved politics. He hopes to go on to study the subject at university. For Adam, all roads lead to politics.

He credits his dad for sparking his interest in it. A life-long Labour voter, William encouraged Adam to take an interest in the world around him. That grounding paid off for his son when he was elected Member of the Scottish Youth Parliament (MYSP) for Bute after running a successful campaign at Rothesay Academy.

Once elected, Adam didn’t hesitate in getting stuck in.

“If there was any problem, any issue that people had they would tell me and I would bring it up at meetings. One of the many things was the tennis courts in Rothesay Meadows. They had fallen into disrepair and seemed to be getting wasted.

“The first thing I done was email Councillor Isobel Strong but I wasn’t really getting anywhere with it. Isobel Strong and [Councillor] Len Scoullar didn’t want too much to do with it. They didn’t really care to be involved was the feeling I got from it,” Adam explained.

“I also got in touch with Alan Reid MP but he didn’t really help either, wouldn’t really tell me where he stood on the matter. I contacted Bute Estate but they didn’t even get back to me so I hit a brick wall.

“I then got in contact with local resident Nicola Jones and have been dealing with her. She is fighting to make something of the area.”

Adam isn’t afraid to pull any punches when it comes to local issues. Despite a healthy respect for his elected representatives, he isn’t frightened to speak up when he feels it’s needed.

He also isn’t frightened to make his views known to his chosen Scottish Labour Party.

“The constituency Labour party run a very aggressive campaign and I told them I didn’t want to be associated with that,” Adam said.

“If you want to try and win an election you have to be upbeat and positive and tell people what you want to do. The way they wanted to run the campaign was completely different to the way I want to run my campaign.

“I have not had a response from them yet. You need to have some point where you can stand up and say this is what I want, not what you want.”

Adam shows strength of character that he hopes people will respect him for, despite their own party allegiance. And given that he’s running for the Labour Party, he knows he’s up against it. In Argyll & Bute, the Labour Party comes second to the Conservatives. That is as significant as it gets in Scotland.

“Labour has not been the most favoured party on Bute, I think everyone knows that. But as time goes on everyone’s saying the same thing to me, they want a forward thinking councillor.

Convincing the people of Bute to take a risk with him is a tall order and Adam is well aware of the challenge ahead. What he can appeal to is the younger age ranges in the area with a guarantee that he will offer them something different. With voter apathy and economic gloom to contend with, he has a real battle on his hands.

When the very idea of that challenge fills him with fighting spirit instead of impending doom, it’s clear that it will take a lot of knocking down before he will reconsider his options. Adam Bellshaw is about to bring something fresh to Bute and he’s sure to ruffle a few feathers.